” The Colorado Language Program is a privately funded school offering English as a Second Language classes, GED preparation and other education services. ” Classes are held in the same space as Trinity Spanish Assembly of God, 601 21st Ave. in Greeley. ” The school also offers childcare services for students’ children, while their parents attend classes. ” For more information about the CLP, call (970) 939-6569 or go to coloradodiverseschool.com. ” Also, the CLP will host an open house from 3-5 p.m. Jan. 18.

He encouraged his wife to open her own school.

The suggestion initially fell on somewhat deaf ears. It wasn’t that Cunanan-Gonzales was unappreciative of her husband’s advice. She just thought it seemed a tad bit unrealistic.

Now, not only does Ray’s idea seem a bit more realistic, it’s become a full-blown reality for Cunanan-Gonzales, a native of the Philippines who has taught the English language for 20 years in Philippines, Thailand,Singapore and Malaysia, while also speaking around the world.

She was hired by Aims as an English as a Second Language instructor in 2017, a week after receiving her U.S. citizenship.

Cunanan-Gonzales, 41, is the founder of the Colorado Language Program, a private business/organization offering ESL classes, GED preparation and other education services.

The school operates in the same space as Trinity Spanish Assembly of God, 601 21st Ave. in Greeley.

The school officially opens today. It has had three well-attended open houses in the past two weeks and will have another Jan. 18.

Cunanan-Gonzales said she decided to open the school because he felt there was a need for students to have more personalized English lessons in a smaller, less intimidating, more intimate setting than that of universities and colleges. 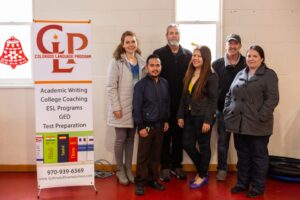 “For example, I have a student in the intermediate level -she’s very good in grammar and writing, but you may not be able to understand her when she talks,” Cunanan-Gonzales said. “But the other classmates, they’r every good at speaking and listening. They’ve been here (in the United States)for 30, 50 years, but they cannot write.”

The diverse staff at the Colorado Language Program specializes in different areas – from learning the language altogether, to pronunciation, reading, writing, etc. 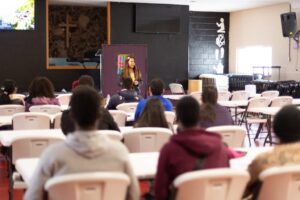 Cunanan-Gonzales’ and her eight-person staff have plans to also start a new charter school, Colorado Diverse School. They hope the school will be up and running with state funding by next year or the year after.

The experienced, diverse staff at CLP teaches English at a variety of levels to those who speak a variety of native languages.

Cunanan-Gonzales owns a Bachelor of Science in psychology from St. Paul University in Quezon City, Philippines. She earned her Master of Arts in Educational Leadership from the University of Northern Colorado in 2017.

She is also working on her Doctor’s Degree in psychology from Colorado State University.

She has been in the United States and the Greeley/Evans area for seven years. 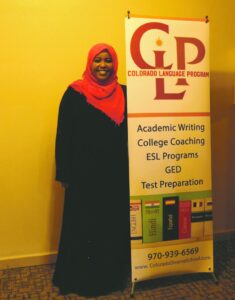 Even with advanced education and a superb grasp of the language, Cunanan-Gonzales has had to overcome some obstacles of her own as an immigrant.

With an undergraduate degree from a foreign country, she recalls having to go through perhaps an overly extensive application process while applying for graduate school at UNC.

Now, through culturally responsive teaching, the CLP – and hopefully, soon, the Colorado Diverse School – Cunanan-Gonzales and her staff would like to provide recent and not-so-recent immigrants the assistance they need to be the productive, successful and happy residents they’re capable of being.

“With my experience, we wanted to help these people,” Cunanan-Gonzales said. “We are very excited, and we are very blessed.” 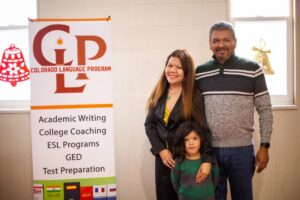